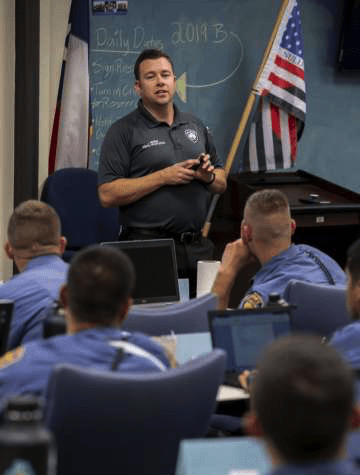 Recently, I had the pleasure of speaking about the state of Policing in the U.S. with Joe Smarro, a San Antonio police officer, former combat Marine, and proponent of policing reform and mental health education.  Joe (and his partner) are the subjects of the eponymous HBO documentary Ernie and Joe.  He is the CEO of Solution Point Plus providing consulting and training to corporations, agencies and schools  to improve mental health, public safety and crisis management.  Our conversation ranged from how mental health impacts the policing system, how officers are recruited, the role of culture in crime and law enforcement.  He has interesting points to make that reflect his personal experience in the field.

Does law enforcement have too much on their plate? Are police officers effectively equipped to deal with the range of problems they are tasked with handling?

“In law enforcement, we are not training police officers how to be human, to connect with the community.  We’re teaching them how to be afraid and how to survive. That creates a very wrong message when we are deploying these officers into our communities looking the way they look with their military type uniforms and tactics, uniforms of aggression and we are there responding to these calls.  Really, they’re calls of compassion and empathy.”

“Again, this is a community issue; this is a lack of education issue.  When you talk specifically about mental health, I really believe that there should be training in schools on mental health because what happens is when an average citizen driving down the road or going to the shopping mall sees a person who symptomatic to a mental illness when they have zero education on what they are looking at – it can appear scary.  Any time you feel scared, you call the police. And now, you are potentially dispatching police to a situation they don’t have any training on, and you don’t have any training on which is why you call the police – you assume they’re equipped to deal with it and most times – they’re not.”

“So then they show up and the best thing they know to do is quickly handle and resolve a situation which sadly can quickly result in use of force, just to get the person in custody to try to get them to a hospital because they don’t know what else to do.”

So Mental Health Issues have a big impact?

Joe talked about studies that in response to crowded jails, looked at jail populations. A large percentage of prisoners were there for fairly petty, misdemeanor crimes.  Subtract them from the equation and thousands of beds get freed up.People with mental illness stay in jail three to four times longer than do violent offenders because the former don’t have the resources to help get them out.

What influences officer behavior in the field – regulations? training?

“It’s culture, for one.  There’s a rigid culture within law enforcement from day one of our training. They just force it down your throat: that every day you go home  The most important thing is that you go home at the end of the day.  I mean every police officer in this country is told that a hundred times during their training. And what that communicates to them is that you are about to embark  on a very dangerous profession. I mean it’s possible, I’m not saying it’s not happening, but last year 59 cops were killed in the line of duty.  228 killed themselves.  So, where’s the real problem?  We are not spending enough time talking about the actual thing that really matters versus preparing for worst case scenarios that rarely come true.”

“So it’s a cultural issue and it’s a training issue.  Again, I’ve been saying this for a while but when we are talking specific to policing reform it has to start not even at the training academy but it needs to start down at the recruiting level.”

“If you look at any law enforcement recruiting video most times it’s with heavy metal, high speed, dramatic cinematic music, a very exciting video showing SWAT teams and K9 units and all the special operations.  We are sending out the message that we want people who are high speed and are willing to get in here and mix it up.  The training only compounds that idea that this is a job where you’re going to die.”

Joe went on to describe the intensive drills and training conducted on preventing a firearm from being taken off an officer.  He acknowledges that it has happened, and that it resulted in officers being killed which is terrible, but noted that it is a rare thing.  Yet so many hours are spent on weapon retention and how to lock down your gun in your holster, training with fellow cadets and instructors simulating fights.

“Law enforcement has a responsibility to take an honest look and ask how much are we contributing to this problem.  How are we vetting and who are we targeting and then how are we training them to prepare them for the street.”

He is concerned that with the heavy media attention these days, the wrong people will be attracted to become a cop, to show that they can hold the line.  “If anything, I want the social justice warriors out there who want to do things differently.”

Do you think that women should have a more prominent place in Law Enforcement? Women often have less ego and more compassion.

“I have long said to your point which I 100% agree with that women are by and large more compassionate. That’s what we need in this profession, to show true willingness and openness.  I’m not saying that men aren’t capable. I’m not saying men can’t do it.  I think we need more women – they are the great equalizers; they offer empathy and compassion. I know of specific recruiting efforts to target women to get women into this profession.  But it’s hard.”

Joe recounted a story where he was on a call, things are going fine until a woman officer arrives on scene and starts to ‘lose it’. She was aggressive and yelling and he wondered what on earth was going on.  Later, he spoke with her and she explained that she felt she had to prove herself to the other guys.  How does that prove anything?  Instead, be yourself and learn to leverage who you are to your advantage, he suggests.

Among your colleagues, what was the general reaction to the George Floyd case?

“This is the first case, the George Floyd incident, where I’ve seen 100 percent agreement. Historically, for example with the cases of Mike Brown and Castile, officers would usually say let’s wait and see what the video shows.  But [with Floyd] right away, everyone was jeez everything about it is wrong. There was unique unity.”

What advice would you give a recruit?

“I teach cadets at the academy.  First of all, I tell them right away whatever beliefs you have about religion, love, family, whatever beliefs you have I would encourage you to challenge them.  All I mean by that is a lot of what we believe, feel, act is because someone told us to; we are just picking up on habits of other people.”  There is a strong need to assimilate to group think.  If you think or act differently, then you are the enemy.  Joe argues that that is the number one problem.  He asks his cadets to name their five closest friends in the world.  If they name five other police officers, that’s a problem.  Whereas he as a marine was deployed to many countries and encountered different cultures, many of his young cadets have not stepped foot outside Texas.  “You only know what you know.  Curiosity is the antidote to judgment.”

Protests against police violence have erupted in cycles for decades. Why isn’t the policing system changing?

Complacency and insufficient community buy-in are the main reasons Joe cites for a lack of progress.  There is an ingrained culture that is hard to shift.  Top leadership is motivated to appease the public and get the media off their back. But many initiatives seem to Joe often to be hollow. He cites mental health programs as one example.

“If you’re a law enforcement agency that hasn’t had a suicide in a few years you start getting complacent and think it’s not happening here.  Just because an officer hasn’t killed themselves doesn’t mean that there are no officers struggling.  Leadership doesn’t need to support their wellness because no one has killed themselves.”  It’s reactive, not proactive.

“We have community policing but what does that actually mean, what are you actually doing?  Show up and go to a meeting and listen to people for a little while and then go complain about it.  What that really communicates – I’m not so sure.  If there isn’t change adopted or being addressed by community policing initiatives then how can it have an impact? A good friend of mine says ‘good enough isn’t good enough.’”

Taking Responsibility on All Sides

Joe said that he’d sat down with a buddy of his who is black. He told him that it’s sad but that he had lost his ‘black card’ a long time ago when he decided to go to college, get a degree and become a police officer.  He has been somewhat ostracized by his community for having joined law enforcement.

HBO made a documentary about Joe and his Partner Ernie Stevens directed by Jenifer McShane. https://ernieandjoethefilm.com