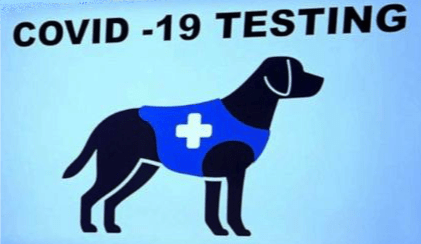 In blog posts over the years, we have hailed the ability of animals to help humans investigate, from technology named after the Star Nosed Mole and dogs trained to find electronic media. Today, dogs are being trained to sniff out Covid.

Researchers from many countries including Australia, Germany, France and the U.S. have been studying the viability of dogs as Covid detectors.  In Finland, they are now conducting the largest trial to date at the Helsinki International airport.  . Passengers are invited to volunteer to be screened by specially trained dogs. The traveler takes a wipe of their skin around their neck, the wipe gets placed into a canister and sniffed by a dog who within 10 seconds gives a paws up or down.  Those travelers with a positive result submit to a conventional test which would corroborate (or not) the canine findings.

How accurate are the dog testers, you ask?  One hundred percent accurate, is what’s being reported.  Far, far better than the molecular PCR, antigen and serologic tests in current use.

Note that the airport testing program is subjective, however.  Just because travelers volunteer does not make them a random selection of the population.  And if a dog does not find Covid, the test subject is not tested with an alternate protocol.  Still, the numbers are amazing.  Are dogs a viable answer?

I reached out to Mike Herstik, owner of International K-9 and expert in the field.

“Dogs do have a great capacity but we must understand that the leap from laboratory to the application in a public venue is very broad.  In order to maintain the integrity of the application we must have strong monitoring protocols in place.”

Herstik explained that no one can dispute a dog’s incredible ability to identify.  But when dogs are exposed to large numbers of people as they would be at a mall, airport or other transit hub, they become desensitized or to use the behavioral term ‘habituated.’  The dog loses interest.  They get bored. They burn out.  It’s not anatomical as much as it is psychological.  This is why the application of their skills for long periods in certain environments that can be problematic.  And this is why close monitoring is so important.  He notes that best practices dictate that dogs be certified by a third party, not in-house, as it were.

I’ve heard through the grapevine that even bomb sniffing dogs have been known to fail a red team test; many get by.  But that doesn’t mean our society should stop using them.  The presence of dogs and their known acumen is in and of itself a real deterrence. When they fail it’s not their noses that are at fault but rather the training, procedures and protocols.  Of course, Covid isn’t a bomb but given how little testing is actually happening and available, even in places where large numbers of humans congregate - airports to name one, using dogs can’t hurt.

I vote for giving man’s best friend a try.