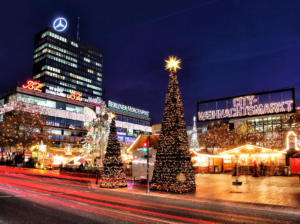 In early December, the European Union’s police agency warned that Islamic State terrorists have shifted their focus to softer, more random European targets in an effort to intimidate the public.  On December 19th, their warning proved prophetic.  A truck plowed into a Christmas Market near Berlin’s Kaiser Wilhelm Memorial Church killing 12 and injuring dozens of others.  It was the worst terrorist attack in Germany in many years.   It was also reminiscent of the devastating truck attack in Nice, France in July of this year.  84 were killed during that rampage along the Boulevard des Anglais crowded with people celebrating Bastille Day.

The use of trucks to conduct suicide bombings is a depressingly familiar tactic in countries in the Middle East ravaged by sectarian violence.  In the attacks in France and Germany, the truck itself was used as the weapon to strike people in popular, crowded venues.

Anis Amri, a 24-year old Tunisian man, is believed to have hijacked the truck used in the attack killing its Polish driver.  Early on the morning of December 23rd, after an international manhunt, Italian police shot and killed Amri after he fired a weapon at the officers during an identity check in Milan.

The New York Times reports that German officials were aware of Amri’s links to radical Islamists.  He had even been placed under surveillance from March to September on suspicion of plotting an attack.  Berlin authorities continued to monitor him until the inquiry was closed.   Amri had been taken into custody pending deportation proceedings after being caught with fake papers.  But he was freed, even though he was considered potentially dangerous.

It would be tempting to blame this attack on intelligence, law enforcement, or even immigration system failures.  But more broadly, it was a security failure – and one that might have been prevented if better physical security measures had been in place.  As it happened, there were only five policemen on patrol at the Berlin Christmas Market.  The area was ringed with slender metal poles, not concrete barriers or bollards.  With huge understatement, a police spokesman said:

“We had some police officers there to keep an eye on the market.  We now see it wasn’t enough.”

Effective physical security measures must be in place to protect high visibility events where large crowds of people will congregate.  This is true whether the venues are Christmas markets in Germany, Bastille Day celebrations in France, New York City’s Times Square on New Year’s Eve, or sporting events or parades anywhere.  Consider the event venue as a “protected environment.”  Establish a perimeter around it protected by jersey barriers or even parked automobiles or trucks – anything to prevent a vehicle from driving at a high rate of speed directly into areas crowded with people.

Vehicle access points should be kept to a minimum and be manned by security personnel trained to look for suspicious indicators related to a terrorist method of operation.  Mohamed Bouhlel, the driver of the truck whose rampage in Nice killed dozens, entered the Boulevard des Anglais through a police checkpoint.  When asked, Bouhlel told checkpoint police he was delivering ice cream.  But he was not driving a refrigerated truck.  This should have raised suspicion.  Instead he was permitted to enter the Boulevard des Anglais with devastating consequences.

The use of vehicles to attack individuals for criminal or terrorist purposes is not a new tactic.  In the past three years, there have been five such attacks – three in Israel, one in Canada, and one in Britain.  Five people died in these attacks.  In Amsterdam in 2009, a mentally ill man crashed his vehicle into a motorcade carrying the Dutch Royal Family, killing five.  And in 2006, an Iranian-born student at the University of North Carolina-Chapel Hill – who sought to avenge the deaths of Muslims abroad – crashed his SUV into a popular pedestrian area called “The Pit” injuring several people.

Below is a video of a car ramming attack at a bus stop that took place in Jerusalem in October, 2015. After hitting two bystanders, the terrorist driver runs from the car with a cleaver to continue attacking a wounded man, and is finally brought down by an armed security officer.