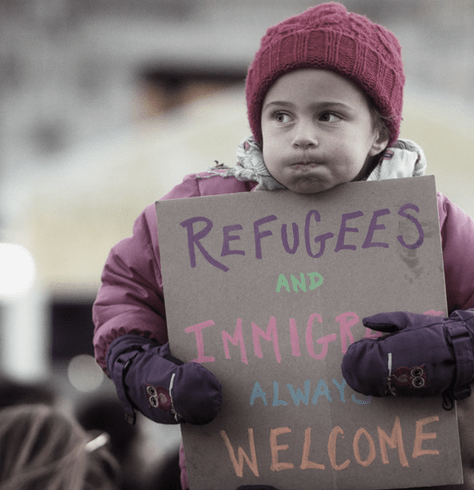 With any large influx of people or for that matters goods, our ability to control and identify the traffic is challenged.  Through the decades, anyone involved in securing these flows – be it a large retail distribution center or a customs agency at a busy border – continually tries to improve on the process.  Tracking technology and security processes are developed, refined and put into place.  When it’s about trying to mitigate contraband and improve loss prevention, these efforts are applauded and politically benign.

When the effort shifts from controlling cargo to controlling humans, naturally the discussion gets heated.

A global majority agrees, at the very least in theory, that we should all work together to mitigate terrorism.  Attacks are on the rise and the battle has been brought to our front yards: a Christmas market in Germany, a music club in France, a community center in California.

If you were living in a neighborhood that was getting a bit sketchy, you’d want some kind of a fence with a gate and a solid lock on the front and back doors.  Those barriers would be in place to discourage the potential burglar and not the postman who has delivered your mail for years or the neighbor kid coming over to play.  So maybe you’d give the gate security code out to the postman and neighbor.  But how would you decide who else exactly gets the security gate code?

There is a profile of the persons whom you deem okay versus those about whom you are uncomfortable.  It would not be about the color of their skin, their age, ethnicity, gender.  You would focus your concern on those persons who pose a threat by virtue of having malicious intent.  The creeps with an axe to grind, for example.  For some, knowing who they want to keep out is a gut feeling.  For others, the decision is more cognitive.  Either way, it’s the intent that counts more than anything else.  Racial profiling is ineffective because it narrows in on a few characteristics while ignoring the ones that really count, the ones that reflect criminal or terrorist intent and the related methods of operation.

That’s why Chameleon Associates developed a method called Predictive Profiling.  This method can be used to ‘filter’ or assess threat of both things and people.  It’s highly effective and the reason that one of the most threatened airlines in the world, El Al Israel Airlines and Ben Gurion International Airport, has not been attacked for half a century.  This non-racial profiling method is used across the board in security in Israel, for transit, infrastructure and for immigration and border security, with great success.

Trump’s ban on the entry of persons from certain countries is ostensibly an effort to prevent would-be terrorists from coming here to do damage.   The threat is a real one.  But the banned countries list seems if not arbitrary then at least not very well thought out.  Many have pointed out that for example, the terrorists who came here to commit the attack on 9/11 were citizens of Saudi Arabia, Egypt, United Arab Emirates and Lebanon.  None of those countries are on the current banned list which includes Iraq, Iran, Syria, Yemen, Sudan, Libya and Somalia.  Some of these places are indeed hotbeds of terrorist activity.  But not every person coming from any one of these countries is a terrorist or even a potential terrorist.

What is the difference between a person born in Yemen who at the age of 6 months old moved to the United Kingdom with his parents versus a person born in the U.K. one month after his parents moved there from Yemen?  Five months.  The passport that individual holds says little to nothing about who they are, their personal history, beliefs and allegiances and intent.  It’s not that a passport might not hold clues as to someone’s movement in the world and timing of travel.  But it’s just one, small, limited piece of the puzzle.  It does not provide the kind of context needed to make an intelligent threat assessment.

The focus needs to be on vetting.  Maybe the ban is just a first if awkward step in revamping security policy that deals with the flow of people in and out of countries in an era of heightened threat.  Improved vetting should be an amalgam of the best technical tools available to gather and crunch data together with background checks that are thorough and intelligent and look not so much for criminal history but for allegiances – which connect to intent.  But the most important tool in our kit is The Interview.

Many would argue that it is impossible to interview everyone.  Not so.  Again here’s an example of Israel that over the last centuries has seen massive waves of immigration.  Almost 1 million people emigrated from (then) Russia to Israel whose population in 1990 was 4.66 million.  That’s an influx of about 25 percent, at one point.  There was a very real threat that the KGB would attempt to infiltrate their agents into the country amongst the immigrant throng.  Each and every entrant to the country was interviewed by skilled personnel who spoke the language and understood the culture and society of the interviewee.  The goal was to ascertain that they were who they claimed and that their true reason for coming was valid, in terms of security, especially.  The questions posed and the questioning methods served that goal.  No two interviews are identical because the questions are related to the individual and the flow of conversation comes from that individual’s answers, which are in every case unique.

Ask immigrants who are here in the U.S. how many of them have been interviewed by the government?  You will find that most were not.  They may well have submitted documents, medical records, fingerprints but no one asked them anything.  Many people who come to the U.S. on a work visa are not interviewed at all.  Refugees do receive more assessment than do others.  The 9/11 terrorists came to the U.S. on student visas and were not interviewed.  From the time of arrival in the country to the moment one gains citizenship, there is very little interaction and in most cases, a single interview.  The State Department might conduct an interview for getting a VISA but even that interview is not solid but rather more rubber stamping and checking off a list of boxes that are the same for everyone.

A friend of mine recently became a U.S. citizen.  She described the oral test she was required to take.  She was asked 3 questions about U.S. history and government.  Most of the questions were a yes/no type. For example, was she now or had she ever been a communist or a terrorist.  (She said no.)  There was no pushing the envelope, no drilling, no intelligent context to the questions that would have a chance to raise many flags.  An interview took place.  It was a chance to learn something about her.  It was a waste of time.

The U.S. population today is around 320 million.  About 1 million people are granted lawful permanent residency in the U.S. annually, and refugees amount to about 1/10th that number.  Putting in place an effective vetting system takes time but would be the best possible security investment and the scope of the project is completely do-able.  I’m betting that Merkel, Hollande and Cameron are looking back on the last few years and wishing today that their government had expanded its interview and vetting capacity.

Chameleon’s next Israel Security Model executive seminar is May 6 – 13.