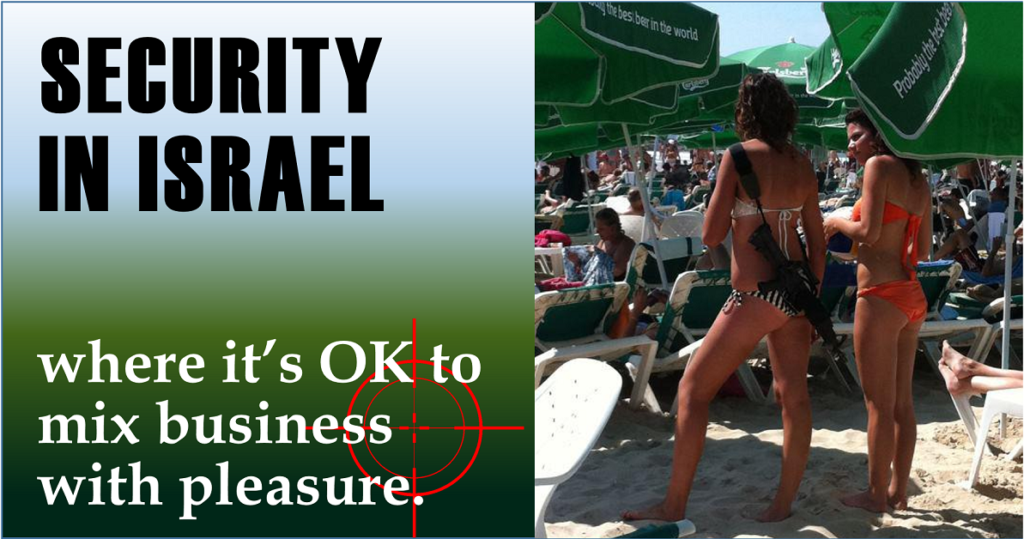 In Israel, security policy and procedures are well integrated into the fabric of its society.  This manifests in a couple ways:

There is a full acceptance of the fact of threat.  This little country has been involved in cyclical wars for decades and its inhabitants are fully aware that it is a high value target amongst its enemies.  The threat is real and in close proximity.  Accepting that security measures are a part of daily life … follows naturally.

In the West, this level of acceptance is less solid but not entirely absent.  For example, for a school located in an area with a high crime rate, some gang activity and the related weapons, having a metal detector at the entrance to the local high school would be expected.  The community sees, knows and accepts the threat.  At a different school located in a bucolic, low crime area, acceptance of certain security measures would be less forthcoming.

Israel is like a village where everyone knows everyone, and everything is everyone’s business.  Israelis don’t operate with six degrees of separation.  Over there, it’s more like two degrees.  The result is that there is a kind of communal reality of a security event regardless of where it takes place or who the victims are.  Experiences are extrapolated.  A threat that is realized in one geographic location is a threat that everyone going forward is keenly aware of and prepares to counter.

Dis-similarly, the U.S. is a bigger country with a different culture.  Columbine took place in 1999, Sandy Hook in 2012 and only now are schools and government agencies coming more fully on board with security measures.  This month, Florida state legislators have actually mandated that an armed security be posted in every school across that state.  Although there are many measures schools can take to bolster security and armed security is just one, it seems that changes have been long in coming into fruition and we’re still not there.

Lastly, there’s an expression in Hebrew Sheekool Daht [דעת שׁיּקּוּלּ] which loosely translated refers to making a balanced decision based on personal knowledge.    Culturally, Israel is not a rigid place and this too is true for security there.  People don’t necessarily ‘go by the book’ and nor does security.  There are guidelines, of course, and basic principles but, also room for flexibility.  Every operator in a security system is encouraged to make a judgment call within certain parameters.  This attitude makes for more rapid security response (no waiting for a Supervisor to make a decision) and also contributes to a sense that everyone’s in it together, which in itself is a powerful force multiplier.  As the image above denotes, while Israeli security policies and methods are among the most effective in the world, solid security doesn’t cancel a day at the beach.