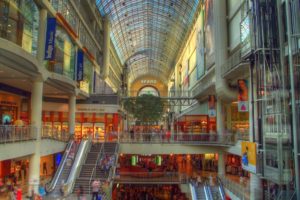 Recent terrorist threats by Al-Shabab on malls in the United States, Canada and Europe have raised concerns with mall owners, commercial real estate management, retailers and the public. CEOs and heads of security are challenged to come up with appropriate, effective and balanced measures that will assure that customers, employees and contractors are safe.

The main concern these business leaders face is a potential attack perpetrated by a radicalized individual who takes his direction (and targets) from online radical Islamist content. Many of the attacks we have seen recently in Europe and the West were committed by such individuals. These terrorists often act alone, apart from a larger terrorist cell with a support network and intercommunication. This makes traditional intelligence operations very difficult if not impossible. Decision makers cannot rely on intelligence agencies to catch these terrorists before they appear at a retail or office location. The focus therefore must be on adequate prevention as well as tactical response strategy.

Terrorist attacks using bombs, firearms or even knives and axes tend to be very short in duration. It takes terrorists seconds and in rare cases minutes to execute their attack plan. Police response to incidents like these would be fast but unfortunately not fast enough to be construed as an effective response tool. To be really effective, each organization has to develop their own local response capability comprised of highly trained police and/or security officers working inside the protected area.

Here are some considerations for insuring your tactical response is effective:

But the most important decision security and business leaders should make is how to modify their prevention strategy for such threats. Here are a few tips on measures to take to immediately improve prevention capability:

Final thought: malls in Israel have been the target of terrorists for decades, yet they have been proven to be impenetrable to suicide bombers and active shooters. The reason is the implementation of the prevention and tactical response measures outlined above.

Here is a case study Chameleon uses in our Proactive Threat Assessment curriculum which illustrates the effectiveness of the Israeli mall security system.

In this CCTV footage taken on December 5, 2005, you can see a terrorist crossing the street towards the Hasharon Mall in Netanya, Israel. His hand is inside the shoulder bag that he is carrying (this is where he holds the bomb detonator). A civilian driver notices this individual as suspicious when the suicide bomber/terrorist crosses the street in front of his vehicle. He steps out of his car to report this to a police car behind him. The police then close in on the suspicious individual. A few minutes later the bomber detonates the bomb - outside the mall. Five people died in this attack including a mall security officer who approached the terrorist.

Suicide bombers are the most difficult to thwart. Had this terrorist been able to enter the mall, the casualties could easily have mounted to dozens and the injuries would be higher with the detonation occurring inside a relatively confined space.

This CCTV video footage was taken from inside the mall and shows the mall security officer response and actions in this terrorist event. The two officers (contracted security from a local Israeli security company) are conducting access control and bag checks at the mall entrance. Generally, they are extending their security outward from the mall and are focused on securing the mall from the outside-out and not from the inside-in. At the top right corner you can see the terrorist approaching the mall. His hand is in his shoulder bag and it seems he hesitates before approaching the entrance. He is detected as suspicious by the one of the mall security officers who then immediately moves into position towards the would-be bomber. The officer asks him to pull his hand out of the bag and the man does not respond. The officer then moves to grab the bomber’s hand and he detonates the bomb.