A new report by Equilar came out detailing the annual expenditures on security of Fortune 100 companies for protecting their CEOs in 2014.  At the top of the list is Amazon which paid $1.6 million to protect its founder and CEO, Jeff Bezos. Trailing behind Amazon is Oracle with $1.5 million spent annually to secure its founder and CEO, Larry Ellison.  Disney is third on the list with $584,075 to protect CEO Bob Iger, followed by the $385,606 Berkshire Hathaway spends on Warren Buffett’s personal protection, and the $320,428 paid by FedEx to insure Fred Smith’s safety.

It is important to mention that these expenses do not include private jet costs and specialized transportation arrangements that usually fall under different corporate budget categories. In fact, for those of us in the executive protection world, these numbers seem to be quite low given the scope of security that top corporate executives consume.  If one factors into the overall expenditures on secure transportation, overseas security arrangements, securing multiple residences, physical security equipment (new installations and upkeep) and training it is easy to arrive at  hundreds of thousands of dollars per year. 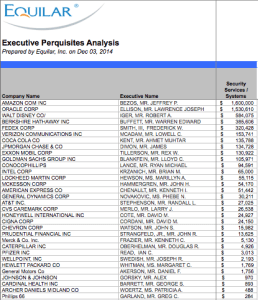 p level executives have been the target of attacks and kidnapping by terrorists, disgruntled employees and criminal organizations. The decision on what level of protection is required usually is  informed by the executive’s personal concerns and sense of vulnerability along with the threat and risk assessment of his corporate security department. An executive who is not worried at all about his personal security is likely to become a target while an executive who is paranoid is likely to over spend in order to counter imaginary threats. So where is the middle ground?

Executives and high-net-worth individuals can find the golden path between indifference and paranoia in the form of awareness. They need to fully understand the threats posed to them in the same way they understand threats and risks to their business.  And then make decisions on where to spend and how to act.

Often, the amount of security around the executive is not as important for preventing an attack as the executive’s own behavior and attitude. His or her choice to break operational routines, to avoid unnecessary public exposure, to choose to blend in and not to stick out and to limit the amount of information an adversary can collect on his daily life and close circles will minimize the his risks tremendously.

Finally, it important for every protectee to remember that executive protection is not an accessory one wears to boost his public image or ego. It is a way of life that requires discipline, sacrifice, intelligence, good communication and flexibility. These are many of the same traits that make an executive successful in his or her business endeavors.