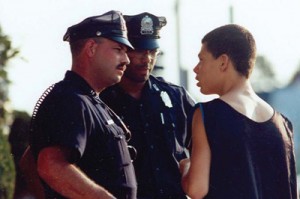 Terrorism presents a challenge to law enforcement since it requires police to act proactively against crimes (terrorist acts) that in many cases have not yet been committed. If the police wait, as they do traditionally, to react to terrorist crimes after they are committed, then the role of the police is that of a first responder, and an investigator. The public, however, expects police to deal with terrorism differently. This is mainly because crimes such as rape, theft, robbery and even murder target the individual while terrorism targets the public. As such, the public demands that the police act to prevent terrorism before it becomes a criminal reality.

Police officers are given the rights to search and seizure based on probable cause (Terry vs. Ohio) and to stop a person for inquiry based on reasonable suspicion. These rights were afforded to officers in order to help them prevent a crime that they believe is about to occur. To prove a crime, officers need to find evidence. However, when it comes to terrorism, evidence and weapons are not always there to find even at the execution of the attack. Let’s consider 9/11 and assume for a minute that the terrorists would have been caught prior to boarding the planes. Would we have had the foresight to articulate probable cause based on the terrorists’ behavior and if so, would we have regarded their box cutters as weapons (evidence) for a possible hijacking? Probably not.

In order to reach reasonable suspicion, officers must rely on their training and experience to come up “with an articulable and particularized belief that criminal activity is afoot”(Orleans vs. United States, 517 U.S. 690 696 (1996) Illinois vs. Gates, 462 U.S at 235). To be able to articulate terrorism-related reasonable suspicion, officers must be trained and gain experience in terrorism methods of operations. In other words, officers must be able to look at a situation or activity (suspicion) and have the capability to explain what they are seeing through their terrorist eyes. Officers who were not trained (or do not have the experience) in doing offensive surveillance, building a bomb or developing a terrorist plan among other things, will never be able to explain what they see as terrorism-related reasonable cause.

As in the case of reasonable suspicion, to develop probable cause officers need to fall back on their training and experience in order to describe “known facts and circumstances that are sufficient to warrant a man of reasonable prudence in the belief that contraband or evidence of a crime will be found” (Orleans vs. United States, 517 U.S. 690 696 (1996) Illinois vs. Gates, 462 U.S at 213,238 (1983). Finding bombs and terrorist weapons is a difficult task since almost anything can be used as a weapon and bombs appear in countless shapes and forms. In order to develop terrorist-related probable cause, officers need to rely more on information provided by the suspect than on tangible evidence. To obtain this information, officers must utilize different questioning techniques then those used when interviewing suspected criminals.

Approaching the suspect from a “law enforcement” angle will probably not work because in the case of identifiable reasonable suspicion and probable cause the suspect has yet to have broken the law. Moreover, cooperation and information is needed to establish probable cause or refute the reasonable suspicions found. Asking for an ID and checking the suspect’s criminal record is unlikely to help the officer because most terrorists avoid criminal activities and their records are therefore clean. The key to success lies in open-ended, public service oriented and inquisitive questioning geared towards refuting reasonable suspicions. In essence, the questioning that the officer conducts should resemble that of a receptionist asking politely about the intentions of a visitor entering a building and not that of an officer who has just pulled over a person for recklessly speeding on the highway.

Finally, Reasonable suspicion and probable cause are tools given to police to enforce the law even when the law has not yet been broken. Bearing this in mind, police must realize that in dealing with terrorism, prevention always supersedes enforcement and the ultimate goal behind terrorism-related reasonable suspicion and probable cause is to give police the legal justification to intervene, deter and prevent – and not necessarily to arrest and convict.