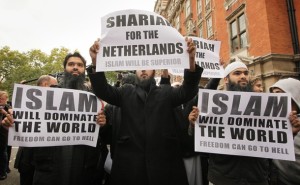 Many immigrant communities in the West are clearly going through an identity crisis. Recent terrorist attacks have been perpetrated by immigrants (or 2nd generation immigrants) who clearly did not see themselves as American, French, British, Australian or Canadian. They saw themselves as enemies of the country in which they live, and as representing something bigger and superior to those nations. They attacked in the name of the Islamic State and their Islamic way of life.

So what triggers such an identity crisis that leads a person to betray his host nation and violently attack his fellow citizens?

Every immigrant community and every individual immigrant throughout history has had to make a choice between assimilation and self-isolation. Assimilation involves acceptance  of a country’s culture and way of life.  Isolation involves alienating oneself in order to sustain autonomy over one's culture, to preserve it. Many immigrants will tell you that choosing to assimilate is made difficult because it often requires self sacrifice and personal compromises.

To successfully open up to the world and the new culture that surrounds them, most immigrants are forced to face the destruction of taboos ingrained in them since childhood. Honor, tradition, religion and social hierarchy are revered in traditional eastern societies while ridiculed by liberal, western societies that value individual expression, freedom of speech and secularism. To a person who spent his formative years in traditional societies, this culture clash can lead to an identity crisis.

An immigrant is often forced to consciously decide whether to integrate or, separate. Unfortunately, being on the fence and deferring a decision is unsustainable.  This is  especially true if the immigrant’s native culture deeply conflicts with the one held by the citizens of his host country. And once the decision is made to isolate oneself from  surrounding people and culture, the road to radicalization can be short and quick.

In future, the ever-growing availability of information, the emergence of transnational societies  and the growth of interconnected economies will only exacerbate this clash of cultures, identities and ideas. Most of us will benefit economically, socially and personally from this new world, however, some people in our society will feel disenfranchised and isolated.  They will have an ax to grind against all those around them.

Our intelligence, security and law enforcement communities should be aware of the cause and effect such an identity crisis can have on a person or a social group. They should be trained on how to identify indicators of personal crisis, conflict of allegiance and someone’s vulnerability to radical religious and ideological indoctrination. With early detection, we have the ability to proactively respond and mitigate internal threats in our society.